"Wearing costume jewellery is like wearing glass slippers. You can feel like you are going to the ball, even if you're not" Kenneth Jay Lane

Kenneth Jay Lane established K.J.L in New York in 1962 and gained a prestigious clientele very quickly, over the next three decades this clientele would include Audrey Hepburn, Elizabeth Taylor and Diana Princess of Wales. Lane's career started in the 1950s when he worked for the art department of Vogue magazine as a layout assistant but quit because he found sitting at a drawing board all day intolerable. Lane then went on to designing shoes for Genesco and while here designed his first collection, which was a range of jewelled accessories made for a runway show.

KJL pieces have always been bold and exquisitely designed; however, they are also priced so that the general population have never found them unattainable. In fact in the mid 1980s Lane started designing jewellery for Avon and in the late 1990s KJL designs were sold on QVC.

To begin with all of Lane's pieces were marked K.J.L, but when Sak's asked him if they could use his name exclusively he called his jewellery Kenneth Jay Lane for them and they advertised him as "Our own Kenneth Lane".
Whilst in the south of France as a young man Lane sat across from Marella Agelli, who he describes as 'one of the most attractive women in the world' at dinner. He described her as tanned, with wonderful short hair and one arm covered in Victorian turquoise snake bracelets. Years later he found a Victorian snake bracelet in an antique store and this inspired his to make his first snake bracelet, which was an immediate success. 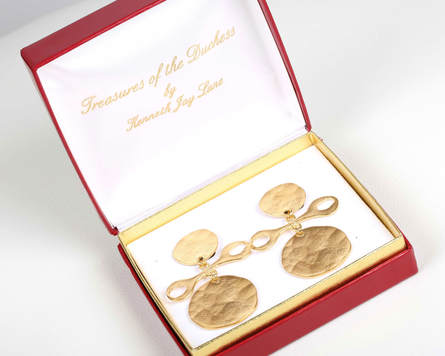 Kenneth Jay lane jewellery was initially marked "K.J.L" with full stops in-between; this signature was used in the 1960s; another mark used was "Kenneth Lane" curving around a copy write symbol in an oval cartouche, this was also used in the 1960s.  Although all KJL jewellery shows wonderful craftsmanship and imagination in design that is paralleled by few, these early pieces are considered by many to show some of the finest craftsmanship.